The "Russia’s Agrarian Policy: Present and Future" summit has begun its work 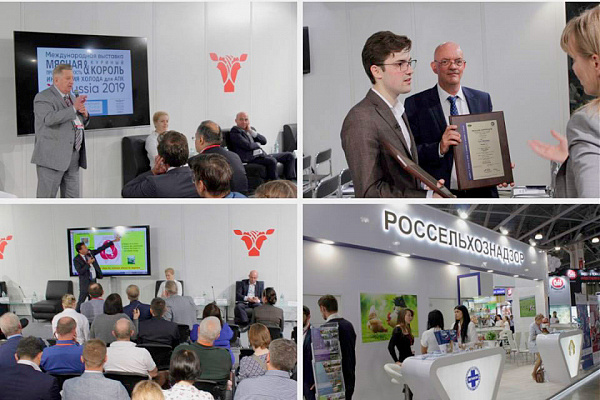 On May 28, 2019 in the framework of the "Meat and Poultry Industry Russia 2019" exhibition, the "Russia’s Agrarian Policy: Present and Future" summit has been opened.
On the first day of the event, its participants discussed important for Russian agro-industrial complex safety and quality issues of protein products, topical issues, rules and recommendations on exporting protein positions.

High attention to this problem is due to the fact that according to estimates by the Food and Agriculture Organization of the United Nations (FAO), the number of starving people on the Earth exceeds 820 million people, and the shortage of food protein only is estimated from 10 to 25 million tons per year. Taking into account the fact that the population of the planet grows by 70 million people annually, the protein shortage will be at least 30 million tons by 2050. The FAO experts note that the world without starving is possible only if the food consumed is safe. These issues are particularly relevant in Russia in its desire to maximize food independence from external markets. "More than 600 million people fall ill and 420 thousand die each year as a result of eating food contaminated with bacteria, viruses, parasites, toxins and chemicals. Improved sanitation and hygiene in the food and agricultural sectors, strengthening control of food production safety will help to reduce the occurrence and spread of antimicrobial resistance throughout the food production chain and the environment, which means to make Russian food products better, safer and more competitive,” said Nariner Bagmanyan, the Head of Asti Group - the Summit organizer.

The second work block of the first day of the Summit was devoted to the problems of exporting Russian agro-industrial products to foreign markets. The participants of the "Export of protein positions: topical issues, rules and recommendations" evening seminar were looking for answers to topical questions arising from novice exporters. The features, the capabilities and the potential of the Russian producers entering foreign markets with their products were analyzed in the speeches of speakers. "May decrees" of the President of the Russian Federation Vladimir Putin determined that the volume of exports of agro-industrial products by 2024 should reach 45 billion rubles. But far from all the Russian manufacturers are ready for full-scale competition abroad. "And it's not just about the quality of the product," Nariner Bagmanyan is sure. The work on foreign markets is quite specific in terms of logistics, marketing, packaging and a number of other aspects. Often, domestic manufacturers simply do not have sufficient knowledge in these areas - at the Summit successful exporters and experts talked about common difficulties and how to overcome them with minimal risks."

Also, several special seminars were held on the first day of the Summit. During the "Safety of feed and foods: Getting ready for the future" seminar, the most important for the Russian agricultural industry development issues of GMP+ certification of production were touched upon. Leading domestic and foreign experts in the field of certification considered various aspects of this problem applicable to the Russian market specifics.

Special seminars have become a separate block of the Summit work: "Strategic partnership of science and business in agriculture: food security "from field to counter" organized by FSBI "ARRIAH" and "Medicines for veterinary use. Today and future" organized by FSBI «VGNKI». The participants analyzed the use of modern veterinary preparations and the possibility of preventing epidemics and pandemics among farm animals and poultry.

The participants of the partner seminar of Hog Slat RUS LLC discussed the successful launch of an innovative reproducer for 11,600 sows with combined sites for completion of growing, and during the event of ProfHolod LLC the possibilities of using energy-efficient materials in agricultural enterprises were presented.

"The summit will continue to work for two days," comments Nariner Bagmanyan. High interest of exhibitors in issues discussed at this event confirms us in the idea that we have chosen the sought-after format, allowing experts from various fields of the agro-industrial complex to exchange views, share experience and develop a consolidated opinion on a number of major issues of the industry operation during the joint discussion".