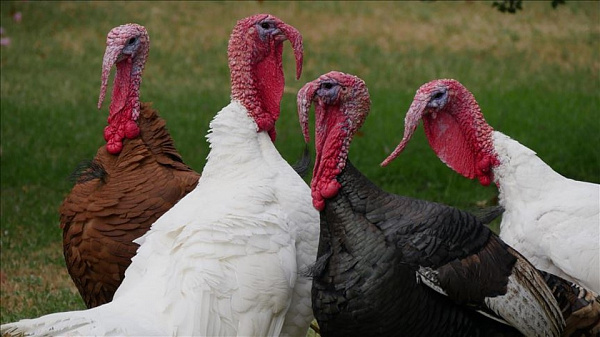 Russia showed a record growth of turkey industry of almost 20 percent in 2020 and became the 4th in the world’s ranking of the largest producers. By the end of the current year, the Russian turkey production may reach 400 000 mt*, taking the 3rd place in the rating.
Even though the global production of turkey meat has remained relatively stable over the past decade, there are clear structural changes in the industry at the international level, a recent study by AGRIFOOD Strategies suggests.

Analysis of industry data for 2016–2020 (see page 3) showed that most of the traditional turkey producing countries are reducing their output. This is largely due to saturation of domestic demand, growing competition from the broiler sector, restrictions on exports to Muslim markets due to tightening halal requirements and a certain reduction of flocks due to increasing outbreaks of avian influenza.

Out of the top 10 turkey meat producing countries, only four countries - Poland, Russia, Spain and Hungary – increased the output.

The U.S, Germany, the UK and France, where industrial turkey farming originated from, have noted a gradual decline in turkey production due to decreasing consumer demand and restrictions on export markets. Per capita turkey meat consumption ranges from 4 to 5 kg per year and is reaching its top, while a significant part of buyers is leaning towards the broiler meat.

In the United States, the largest market of turkey meat in the world, which accounts for more than half of the total volume, consumption of turkey meat is stagnating due to the seasonal adjustment of sales, a considerable part of which occurs during Thanksgiving and Christmas. In this regard, local producers are trying to find a way out in promoting the sales of further processed products - hams, hot dogs, burgers, and ready meals.

Turkey consumption in Europe and North America was significantly affected by quarantine measures related to the COVID-19 pandemic. The closure of a significant number of food service outlets and institutional catering caused a drastic fall of sales in these sectors, while retail sales could not compensate this decline. Due to economic difficulties caused by the pandemic, as well as logistic and quarantine restrictions related to it, export markets have also stagnated.

According to the data from European Association of Poultry Processors and Traders (AVEC), a tendency to reduce turkey production in many European countries will continue throughout 2021. The USDA also does not expect the domestic turkey sector to pick up in the U.S., despite the slow economic recovery and food service. The outlook for Brazil is not bright either: the local Association of Protein Producers ABPA reports a significant increase in the cost of feed and other production components.

In contrast to traditional leaders, the newcomer countries of the industry have shown positive, and some of them - record results in the last five years and even in 2020. Polish turkey production has grown by 127 percent in five years - from 179 thousand tons to 408 thousand tons - thanks to significant investments in the industry and lower production costs compared to other EU countries and the UK, where the largest volume of Polish production is being sent. Hungary has registered an increase of almost 25% due to the same reason. The growth of the turkey industry in Spain over the past five years has exceeded 20%, however, in the last two years it has slowed down significantly, resulting in the negative numbers in 2020.

Over the past five years, Russia has gained the second place in the list of the most actively developing national turkey breeding industries, having increased its production by 45.56 per cent. Despite the financial difficulties of individual companies and several outbreaks of avian influenza in 2018–2020, the industry has managed maintain a positive dynamic. In 2020 alone, the increase amounted to 54 thousand tons (20%), which made it possible to compensate for the decline in broiler production in the total balance of Russian poultry meat.

This year, Russia expects to increase its turkey meat output by over 20% (70 thousand tons) and reach 400 thousand tons, which may bring it to the third place in the rating of the world's leading producers and bring it quite closer to Poland. However, this will only become possible if there are no outbreaks of avian influenza and the pace of investment in the industry is maintained.

The industry growth is explained by the significant undersupply of turkey meat in the domestic market. In many countries where turkey is a traditional part of the «meat basket» its share reaches 10%. In case of Russia this may mean up to 1 million tons, which is two and a half times lower than the best projections for 2021.

By the end of this year the per capita consumption of turkey meat in Russia may reach 2.7 kilograms, while in European countries it constitutes, on average, 4-5 kilograms, 7.8 kg in the USA, and more than 10 in Israel.

The development of the sector has a significant potential in food services (including commercial and institutional catering) and in retailing of cooked items: hams, sausages, and delis. These items provide the bulk of sales in the «mature» turkey markets in Europe and North America.

In May 2021 Russian turkey breeders united into the National Association of Turkey Producers (NAPI). The consolidation of the industry's efforts is expected to ensure its further growth and bring Russia to the second place in turkey production in the world within the next 2-3 years, going ahead of Poland, Germany, France, and other historical leaders in this sector. 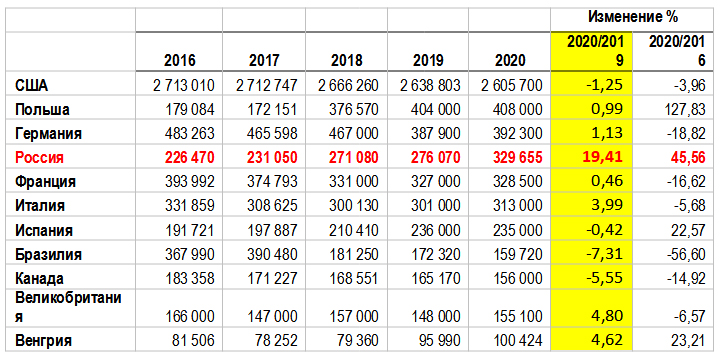 Source: calculations of AGRIFOOD Strategies based on the data from USDA, AVEC, ABPA, AAFC, OFOTM, Statista and other official, sectoral and research organizations.

*Note: All numbers are given in slaughter (dressed) weight